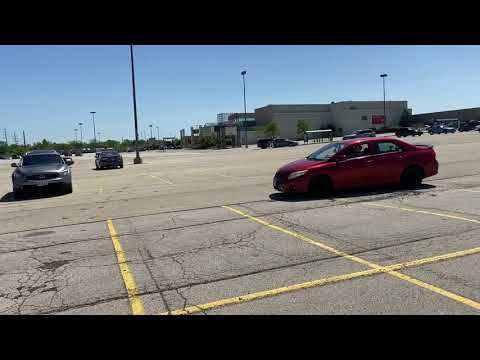 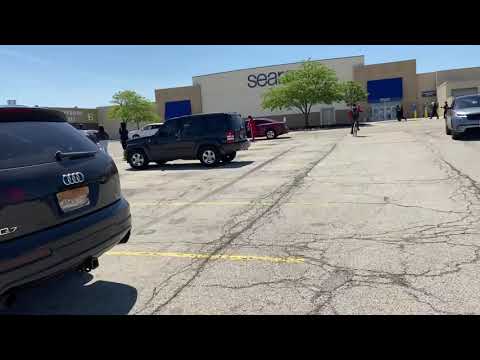 Police perform CPR on a man shot outside Olive Garden near the northeast exit to North Riverside Park Mall on Sunday, May 31. | Bob Uphues/Editor

Police guard the north entrance to Kohl's in North Riverside on May 31 after looters broke in by smashing the locked glass doors. | Bob Uphues/Editor

Police in riot gear stand outside Entrance 2 to North Riverside Park Mall after clearing the shopping center of looters on May 31. | Bob Uphues/Editor

Police stand outside Best Buy in North Riverside on the afternoon of May 31. Looters smashed the glass entry door and then forced open the metal security gate to gain access to the store. | Bob Uphues/Editor

Police stand outside Best Buy in North Riverside on the afternoon of May 31. Looters smashed the glass entry door and then forced open the metal security gate to gain access to the store. | Bob Uphues/Editor

Berwyn shut down eastbound traffic on Cermak Road into the city at Harlem Avenue after looting erupted on May 31. | Bob Uphues/Editor

Looters broke into both the north and east (above) entrances at Kohl's in North Riverside on May 31. | Bob Uphues/editor

Looters forced their way past the security gate and broke out other windows to gain entry to Binny's Beverage Depot in North Riverside on May 31. | Bob Uphues/Editor
< >
< >

The man shot and killed at North Riverside Park Mall on Sunday afternoon has been identified by the Cook County Medical Examiner as 22-year-old Myqwon Blanchard, of Chicago. An autopsy is scheduled for today.

Police have confirmed that the WESTAF homicide unit is investigating the shooting outside Olive Garden at the North Riverside Park Mall. The Cook County Medical Examiner's office is reporting a death, but no identifying information or cause listed, at the address of Olive Garden in North Riverside.

Pace has announced that will shut down bus service beginning at 6:30 p.m. until further notice. All passengers currently in transit will be taken to their stops.

Hundreds of people converged Sunday afternoon on the area around Harlem Avenue and Cermak Road, smashing their way into stores and looting them.

At least one person was shot, reportedly not by police, around 2:35 p.m. outside Olive Garden at North Riverside Park Mall, 7501 Cermak Road, as officers in riot gear chased looters from the shopping center property.

A half dozen or more loud gunshots rang out as cars sped away toward the northeast exit drive of the mall.

Paramedics took the shooting victim to the hospital after police and a nurse, who got out of a car to assist, performed CPR on him. His condition has not been confirmed, but he appeared to be gravely wounded.

Another volley of gunfire could be heard coming from the west side of the mall property at about 2:55 p.m., but no one apparently was wounded in that instance.

Meanwhile, the vandalism and looting that took place in downtown Chicago on Saturday night, spread to the suburbs Sunday, including Cicero and Berwyn. The incidents in Chicago and the suburbs come in the wake of protests, some peaceful and many violent, nationwide following the outrage over the death of George Floyd in Minneapolis and the subsequent arrest of the police officer Derek Chauvin, who allegedly killed him by kneeling on his neck for nine minutes while arresting him. Chauvin has been charged with third-degree murder and three other officers present during the arrest have been fired.

The first sign of trouble in North Riverside was reported around 1 p.m., when "two carloads of people" drove up to the doors of the food court, armed with either baseball bats or pipes, according to North Riverside Police Chief Carlos Garcia.

"Luckily, our officers just happened to be in the area," said Garcia, who added the cars sped away when police drove up.

For the next hour or so, things remained quiet, although both Berwyn and North Riverside officials advised shopping centers and stores in the Harlem and Cermak complex to close early as reports of looting in other suburbs began surfacing.

Berwyn public works trucks and police vehicles blocked entrances and exits to Cermak Plaza, while vehicles streamed into the parking lot at the mall and nearby shopping centers.

Looters smashed their way into the east mall entrance south of Sears and could be seen running back to their vehicles carrying merchandise. Looters also hit City Sports, 7401 24th St., and Kohl's, 2200 Harlem Ave.

"There were hundreds within two minutes," said Garcia. "Now they're in all the other areas, City Sports, they tried Binny's and it's still in progress. We're trying to close all the entrances and get the cars out of here."

Riverside Police Chief Thomas Weitzel said no businesses were targeted in that community, but he said there were multiple reports of large numbers of people congregating in the area near Harlem Avenue and 26th Street. Groups of people were also reported running through yards in the Longcommon/Byrd/Berkeley area. One report of a burglary turned out to be false, Weitzel said.

All three gas stations on Harlem Avenue have been closed, and Weitzel said he ordered all downtown Riverside businesses and restaurants closed for the rest of the day.

In Brookfield, things have been relatively calm, said Police Chief Edward Petrak, although police did stop a "caravan" of vehicles that were speeding down Ogden Avenue at about 60 mph. Police contacted business owners to let them know what was happening east of the village and sent an email notification to residents, asking people to stay homes.

This story is developing.

Thanks for turning to Riverside Brookfield Landmark and RBLandmark.com. We love our thousands of digital-only readers. Now though we're asking you to partner up in paying for our reporters and photographers who report this news. It had to happen, right?

On the plus side, we're giving you a simple way, and a better reason, to join in. We're now a non-profit -- Growing Community Media -- so your donation is tax deductible. And signing up for a monthly donation, or making a one-time donation, is fast and easy.

No threats from us. The news will be here. No paywalls or article countdowns. We're counting on an exquisite mix of civic enlightenment and mild shaming. Sort of like public radio.

Marion Hughes from No. Riverside

If North Riverside police had blocked entrances to the mall like all the others did, all the looting & damage would not have occurred.

I wonder how many of the looters and rioters were recent Tom Dart / Kim Foxx jail releasees because of the Wuhan Virus? This dude that was killed appeared to have been very recently in CC jail custody. No one in the Chicago media will ever ask that question or any other tough question since their primary job is to prop-up the Machine that runs this county and state. I agree on trashing that entire mall area too. Build some nice homes (all single-family), parks, and other open space. North Riverside is becoming a seriously big problem that's endangering everyone in this area. The old cash-cow is dead. Create a new cash-cow. Casino is fine.

Hotel / Casino complex.. We'd never pay taxes again and they have their own cops

Just another weekend at the mall, and surrounding shopping area. Tear it all down, and put up some nice homes. Tax dollars lost would be offset by less policing necessary to control the thugs.

That is how it was handled in the L.A. riots of the early 90s David. The police are not equipped to handle this volume of bad guys.

I worked with Dr, Hejna and Dr. Blonsky for several...

I could not read all of the details of this tragic...

Kevin, not much empathy coming from you, huh? He's...

My heart goes out to these two young men. I pray for...

Dr. Ryan-Toye's refrence to the challenges of...

Pete is an incredibly nice, caring guy to all his...

On: Lions honor Boutsikakis as Person...

Cermak Plaza certainly has made a rebound, though some...

On: Change on the way

Thank god. That store is a hole. Worst produce...

On: Jewel-Osco to exit North Riverside...