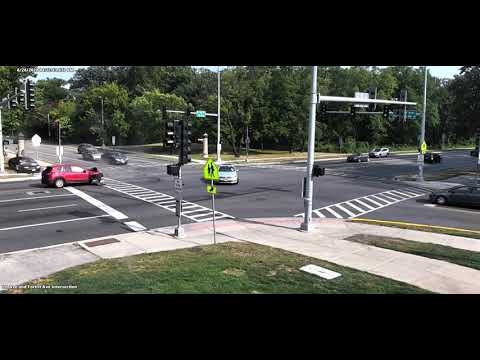 Firefighters cut open the front passenger side door of a blue Saturn where one passenger was trapped inside after a crash at First and Forest avenues in Riverside on Aug. 26.
< >
< >

Riverside police cited an 18-year-old Prospect Heights woman for three traffic offenses after she allegedly turned left in front of oncoming traffic at about 4:25 p.m. on Aug. 26, resulting in a crash that left her and her two passengers injured.

It could have been much worse.

Video from a village security camera mounted on the east wall of Riverside-Brookfield High School shows a blue 2017 Saturn turning left from southbound First Avenue to eastbound Forest Avenue in front of a red 2016 Mazda.

The Mazda strikes the Saturn's passenger side door so hard that it forces the Saturn off the roadway and onto the northeast corner of First and Forest avenues. Three young boys, two with bicycles, were standing on that corner waiting to cross First Avenue at the time of the crash.

They can be seen on the security video running away as the Saturn spins off the roadway where they were standing. None of the boys was hurt and all three had left the scene by the time police arrived, according to Police Chief Thomas Weitzel.

"As is clearly stated in the street camera video, this situation could have been far worse because it had the possibility of being a triple fatality for the pedestrians," Weitzel said in a news release. "I am so thankful they were able to get out of the way."

The video also helped police determine which driver was at fault, since it shows the Saturn turning in front of the Mazda as that vehicle was entering the intersection. The driver of the Mazda had no time to stop prior to the crash.

A 27-year-old Norridge woman, who was the driver of the Mazda, was not injured, police said.

All three people inside the Saturn, including the driver, a 17-year-old Wheeling girl who was a front-seat passenger and a 19-year-old Prospect Heights woman who was the backseat passenger, suffered unspecified non-life threatening injuries and were taken to Loyola University Medical Center in Maywood. The front passenger reportedly was trapped inside the vehicle and had to be extricated by firefighters.

At least two of those people had been released from the hospital by Thursday morning, Weitzel said.

Police cited the driver of the Saturn for having no valid driver's license, failure to yield and failure to reduce speed to avoid a crash.

Thanks for turning to Riverside Brookfield Landmark and RBLandmark.com. We love our thousands of digital-only readers. Now though we're asking you to partner up in paying for our reporters and photographers who report this news. It had to happen, right?

On the plus side, we're giving you a simple way, and a better reason, to join in. We're now a non-profit -- Growing Community Media -- so your donation is tax deductible. And signing up for a monthly donation, or making a one-time donation, is fast and easy.

No threats from us. The news will be here. No paywalls or article countdowns. We're counting on an exquisite mix of civic enlightenment and mild shaming. Sort of like public radio.

John- toxicology? Why would you ask for that immediately? because their teens? Don't you think that if there was probable cause that Chief Weitzle and his officers wouldn't have asked for it? And is there some law that I am not aware of that if I don't live in Riverside or if I'm from a NW suburb that I can't drive through Riverside?

Was toxicology done?? Did anyone ask what 3 teenagers from the NW suburbs were doing in RIverside?? It's not exactly a secret what attracts these kids to Forest/Burlington Avenue

Holy cow folks, commenting about where the car turned from and who is 17 or 18, the lead, blah blah, how about the driver of the car that caused the wreck had NO VALID LICENSE to drive? That is one of the main problems that needs to be identified and solved.

I stand corrected. Excuse the mistake.

Karen Klimasz Boylan it says the passanger was a 17 year old from Wheeling. There is a comma after the word driver.

Was the driver 17 or 18? From wheeling or prospect heights, your lead says one thing and the body of the story says something else.

RESOLUTION NO. R-57-20 A RESOLUTION PROVIDING FOR THE LEVY OF AN ADDITIONAL LIBRARY TAX FOR BUILDING AND MAINTENANCE

Thank you to District 208 BOE, RB Administration, and...

Over the years, RBHS has not been bashful about...

Ms. Murphy, thank you for a cogent argument on behalf...

class at RB potentially exposes someone to up to 70...

The Board's key concern should be...

I will not be sending my child to school. Too many...

I am guessing that all of the teachers that are not...

How about SD103 doing the testing? If they test...

On: When opportunity knocks, answer